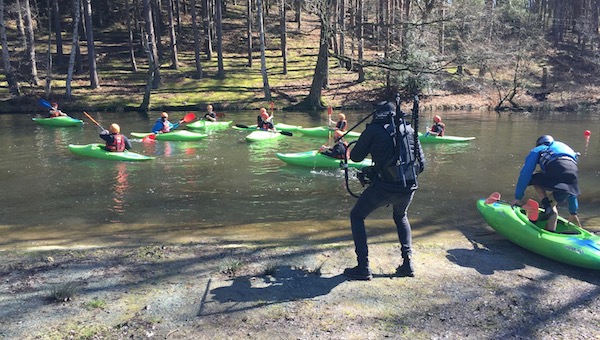 Filming outdoor activities can be so much fun… and a lot of hard work! This week, several members of the Zeddy Productions team went out on location with APM, filming for their National Citizen Service youth experience scheme. The scheme is a three-part programme for 15-17 year olds which encourages them to try new things, learn new skills, and meet new people. And we had the pleasure of filming the outdoor activities element of the programme. 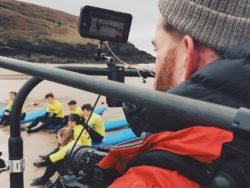 So, day one took us to beautiful Pembrokeshire, in Wales, where we were filming the surfing activity on the most stunning beach. Using the 4K camera with cinema lenses, on the gimbal, and mounted on the vest harness, we were able to get sleek tracking shots of the the participants receiving their surfing training before it was time for them to enter the freezing water. We rigged one of the young people up with a GoPro attached to her helmet for some awesome action shots while we filmed from the relative warmth of the sand. A brilliant day had by all.

That night we travelled up to Shrewsbury to film day two at PGL Borreaton Park, where the activities  were abseiling and kayaking. Did you know that it is possible to film, whilst floating down the river, in a kayak, on your own, with nothing to hold on to? No, neither did we, until we had to do it! You see, nothing is too much trouble for the Zeddy Productions crew!

The abseiling took the participants and Zeddy crew to dizzying heights, where we again used the GoPro’s to get in on the descent action. They’re hardcore these kids!

Day three took us scrambling on The Roaches in the Peak District. The day started with us moving the young people, the Zeddy Productions team, and the equipment across The Roaches, up rock faces and through the tightest of gaps in the rock formations. By the time the day was over, we had muscles on our muscles.

Aching muscles aside, we knew we could get some great shots here, especially as we were also joined by our aerial specialists to capture the most incredible shots from the air. This, coupled with the 4K on the ground, and the amazing scenery, gave us stunning shots of every aspect of the day’s activity.

The final day of filming saw us filming the raft building and climbing at PGL Liddington. Fortunately for us we were able to stay on the shore this time, which were glad of, as the water was bitingly cold. The same could not be said for the participants, who spent much of the day falling off their self-made rafts. All captured on camera.

The aerial team produced such great shots from the activities at The Roaches that they were asked to come back again for the raft building and climbing, which made for another day of action packed filming.

It’s been so much fun to spend a few days with this amazing company and their participants, and we can’t wait to gather all of the footage into the edit and produce a sleek, fast-paced series of promotional videos to encourage other young people onto this incredible scheme.